Life and Growth of Oak Trees 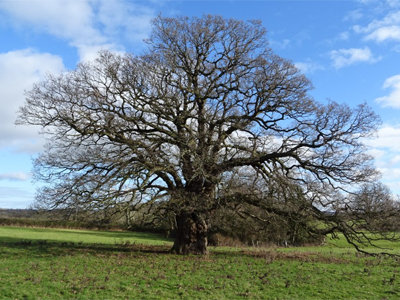 The oak flourishes in exposed and sunny situations, especially where the soil is well drained. It can be recognised by the zig-zag and wide-spreading boughs, which often spring from the trunk almost horizontally. A very strong form of trunk is plainly necessary to support such branches, and in an old solitary oak it may often be seen that the bole is very thick at the ground line, and then rapidly narrows, until at a height about equal to the base-diameter it may be only half or one-third the thickness. Above this point it is practically cylindrical up to the origin of the boughs, where it is swollen. An oak growing in a wood, or plantation, is of very different form. Its trunk is tall and straight, and the larger boughs are not given off until near the top. To secure the necessary light, the tree used its energy in growing in length, and in keeping pace with its neighbours rather than in spreading laterally. In such a crowded oak the lateral buds generally remain undeveloped, while the end of the shoot pushes onwards and upwards to the light. The opposite is the case when there is plenty of room and light on all sides. Then it is usually the terminal bud which dies, while the lateral buds grow out into branches, forming the "knee-joints" which were once so greatly valued for shipbuilding. The bark of the oak is very rugged, with ridges and furrows running almost vertically.

The young shoots which are formed when the buds expand in spring are short, and the leaves are set closely together. As a result, the oak's foliage is characteristically dense and thick. The leaves are very distinctive; their general shape is oval, and the margin is deeply and irregularly lobed.

If in early spring you go out in the woods and fix on an old oak tree (the oak hardly ever flowers before it is 50 years old), you shall probably see the flowers on some of the young twigs. The female flowers - one to five on each flower-stalk - are near the end of the twig, while the male flowers arise lower down. The female flowers are destitute of stamens, each consisting practically of a single pistil, partially enclosed in two envelopes, the lower of which ultimately becomes the familiar 'cup' of the acorn. The stigma has three spreading lobes for receiving pollen. The male stalks or catkins, hang down from the lower part of the twig, and every stalk bears about a dozen flowers. The male flowers have each from 5 to 12 stamens, but they have no pistil. The stamens produce pollen in the usual way, and when they burst, the wind blows the loose pollen from the stamens and scatters it in the air. Some of the pollen dust is almost certain to be wafted to the stigmas of the female flowers, and the pollen grains put out tubes, and in due course fertilise the ovules.