The Minchenden Oak and Gardens 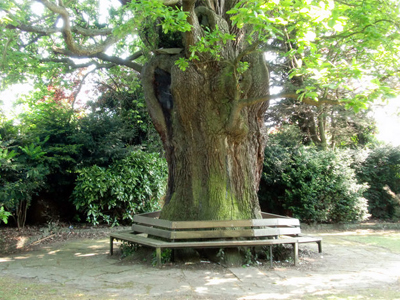 Minchenden Oak and Garden of Remembrance

These gardens are on the former site of the Minchenden Estate, one of the great estates in the area of Southgate, which was owned by the Duke of Chandos. Minchenden House was built around 1747 by John Nicholl from whom Chandos purchased it, using it as his country house after his property Canons. The Duchess Dowager of Chandos lived here on occasion until her death in 1813 and it was then passed to the Marquis of Buckingham whose wife was the daughter and heiress of the last duke of Chandos.

The old mansion was knocked down in 1853 although a smaller house, Minchenden Lodge, was built in the mid 19th century to the north. A relic of the grounds of Minchenden House remains today in the form of the Minchenden or Chandos Oak, an ancient pollarded oak tree, said in the 19th century to be the largest in England with a girth of over 27 feet. Edward Walford reports that its spread in 1873 was 'no less than 126 feet, and it is still growing'. It is thought to be a survivor of the ancient Forest of Middlesex and may be some 800 years old.

The Minchenden Oak's is in what is now known as Minchenden Oak Gardens, which was formed in 1934 as a Garden of Remembrance, on land adjacent to the old graveyard of Christ Church. Here you can see this ancient pollarded tree.