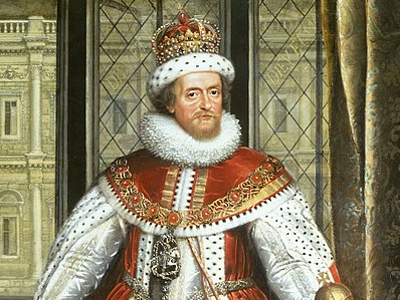 James Stuart was the first King James of England, and the sixth of Scotland, and was a foolish and badly behaved man. He was the son of the unhappy Mary Queen of Scots, and after she was imprisoned he was made king by the Scottish lords even though he was very young. James took to learning from books very well but nobody could teach him how to behave properly. He became King of England when Queen Elizabeth I died because he was Elizabeth's cousin. This was the time that England and Scotland both came under one king.

King James's attitude towards the English was poor to begin with. As soon as he became aware that the queen was dead he travelled to London with a great number of Scotsmen who seemed to think they could grab all the money and wealth they could. He then made so many lords and knights that he was laughed at. The biggest problem with his attitude at the time was his belief that nothing, including parliaments, should prevent kings from doing as they pleased, and taking money from people whenever they liked.

Having found out that King James and parliament would meet on 5th November 1605, the Catholics decided it was time to act. It was known that there were some cellars and tunnels running under the houses of parliament. Here, they thought was an ideal place to blow up parliament and kill everybody inside. They recruited a man called Guy Fawkes to set fire to some gunpowder in the cellars. However, this was not to be. It seems that parliament's Lord Mounteagle had a friend amongst the Catholics who sent him a letter advising him to stay away from parliament that day. King James I found out about this letter and kept the cellars under parliament under close watch. It wasn't long before Guy Fawkes and the other conspirators Robert Catesby, Thomas Percy, Thomas Winter and Robert Keyes were caught waiting for the right time to set fire to the gunpowder. Guy Fawkes and the conspirators were taken to the Tower of London and later tried for high treason in Westminster Hall. They were all convicted and sentenced to death.