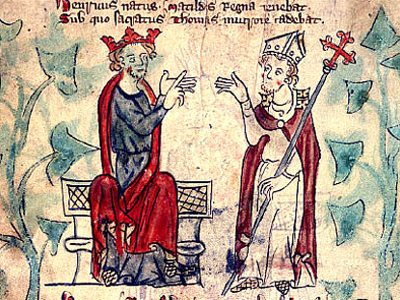 The English were happy the day young Henry was made king. He was wise, intelligent and brave as well as being the richest king of his time and having the largest estates. When Henry became king of England one of the first things he did was to expel all the Norman and French soldiers who had been brought over from France to fight either for King Stephen or for Maude. Henry preferred English soldiers to foreign soldiers as he firmly believed that English soldiers would treat his poeple better. After this, he made some of the Norman and English barons pull down their castles because they were being used to shelter thieves and robbers. King Henry then decided to rebuild some of the towns that were burnt and destroyed during the wars during King Stephen's reign. Thus the ordinary English people began to feel safe again and started to rebuild their homes and cottages, and once more to plough the fields. England was becoming merry again with young men and ladies taking to their horses and riding out in the countryside and hunting foxes and deer in the forests.

King Henry was extremely fond of hunting but he was careful not to spend too much time indulging himself. Instead, he spent most of his time seeing what needed doing to repair the damage caused by the civil war of King Stephen's time. Being an intelligent man, King Henry employed the cleverest men he could find to put everything in order. The wisest of men were made judges and told to visit all the towns and villages to spread justice to all the English people. King Henry was also very fond of learning and often gave money to poets and those who made verses.

Events in Ireland played a big part in King Henry's life at the time. As Ireland was divided into several kingdoms the respective kings frequently quarrelled with one another. One of the Irish kings, Dermot approached Henry for help but Henry was too busy at home to be of any real assistance. However, he offered the support of his barons if any of them wished to assist the Irish themselves. King Dermot was so grateful that he promised that if his enemies could be stopped or killed then he would call the King of England Lord over Ireland, and that he and the rest of the Irish kings would be his servants. Soon help was on its way to King Dermot in Ireland and after a great deal of fighting the situation was resolved. From that time onward Ireland had the same king as England.

Scotland also had kings of its own and although it was a country much like England the people were much poorer. The king of Scotland called William the Lion, having heard that King Henry was in Normandy, decided to take his army into England to rob and pillage. Not long after this started several of Henry's noblemen and bishops assembled their own forces and marched north to capture the Scottish king. William was sent to London and King Henry would not set him free until he had promised that, in future, kings of Scotland would be under-kings to the kings of England.