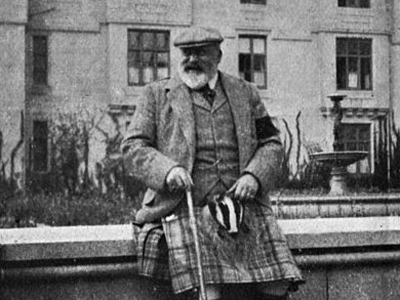 When Queen Victoria died in 1901, her son Edward VII became King of England, and in such a short reign of just 9 years he became one of the most popular Kings of England both at home and abroad. Edward VII was no stranger to popularity as when Queen Victoria was alive he was the fun-loving Prince of Wales who was known and liked everywhere. As well as taking on most of his mother's official duties during Victoria's later life, Edward naturally became a leader of London society, and willingly became a patron of sport of every description. Outwardly, he was one of the good, old-fashioned English country gentlemen of the time who made friends everywhere he went. The English people looked forward to his reign.

Edward was crowned in Westminster Abbey but it was later than expected. Sadly, just before the coronation day he became seriously ill as all the work he had been doing became too much for him, and it was only after the great efforts of a clever surgeon that he was well enough to be crowned some three months later. One of the first things King Edward VII did was bring about an end to the Boer war which had been dragging on for years. At the time, this bought peace and security in South Africa. Towards the end of the same year Prince George, who had been made Duke of Cornwall on the death of Queen Victoria, was made Prince of Wales. Prince George became a great ambassador for England and made many overseas visits to the British countries at the time. The most important visit was to Australia where the different states had decided to join together and form a 'Commonwealth'.

King Edward VII loved travelling and one of his favourite countries to visit was France. He had been to France many times as Prince of Wales so he was already popular with the French people who were glad to find that his affection for their country had increased. Edward developed a personal frienship with President Fallieres, and the exchange visits by both the English and French fleets helped to bring about an entente cordiale with England.