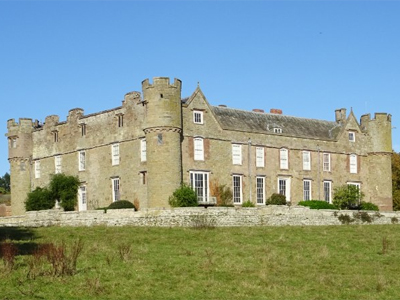 Croft Castle is a 15th century fortified manor house in the heart of the beautiful Herefordshire countryside and currently managed by the National Trust and open to visitors. Set in 1,500 glorious acres of ancient woodland and parkland, Croft Castle is an interesting place to visit and ideal for couples and family days out. There are stunning views, interesting walks, woodland trails, a castle-themed play area, a souvenir and gift shop, and a lovely tea room selling fresh, local produce. The castle was originally built on a 14th century site and is loated near the village of Yarpole and the town of Leominster in Herefordshire.

Croft Castle is the home of the Croft family who have lived here for almost 1,000 years and was a seat of power and politics - Sir Richard Croft was the sheriff of Herefordshire who captured Prince Edward at the battle of Tewkesbury and was rewarded with a knighthood by King Henry VI, and Herbert Croft was the Bishop of Hereford Cathedral. The English Civil War battle of Mortimer's Cross took place nearby in 1461 during which the castle and some estate buildings suffered damage. Croft Castle was restored soon after and many building and structural alterations were made. Later, in the 18th century it was partly rebuilt in Gothic style.

The castle is a three storey quadrangled manor house built round a central courtyard with castellated round towers at each corner. There are fine Georgian interiors to see with beautiful period furnishings, rare and valuable furniture, family portraits and paintings. There is a beautiful study by Gainsborough of Elizabeth Cowper, wife of Sir Archer Croft, and the elegant staircase hall with delicate Gothic plasterwork was created by T. T. Pritchard in the 1760s. There is also the small, fine medieval and Tudor church of St. Michaels close to the front of the castle which contains the altar tomb of Sir Richard Croft (1430 - 1509). The wooded parkland that surrounds the castle has an avenue of 300 fine Spanish chestnut trees some of which may be up to 350 years old.

Visitors to Croft Castle will find the woodlands, parkland and tea room open throughout the year and be able to walk through miles of beautiful and tranquil woodland trails and glades. The estate also has a shop selling local gifts, secondhand books, and wildlife and gardening gifts. The castle is normally open between February and December. The full address is Croft Castle, Yarpole, near Leominster, Herefordshire HR6 9PW.