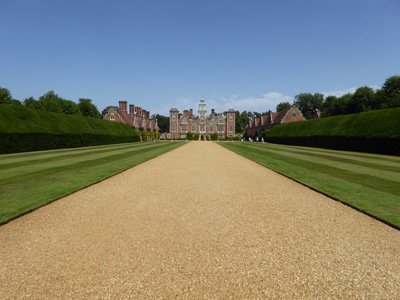 The Drive at Blickling Hall

Blickling Hall is a Jacobean stately mansion with over 400 years of fascinating history in the village of Blickling, north of Aylsham in Norfolk, and is in the care of the National Trust. It is one of the biggest county estates in Norfolk and the house, beautiful gardens and landscaped parkland are open to visitors. Here, you get a glimpse of the lives of those who lived and worked above and below stairs. Blickling Hall is on the site of Anne Boleyn's childhood home and she was Henry VIII's second wife and mother of Queen Elizabeth I. The Blickling estate is set in 4,800 acres of beautiful countryside, formal and informal gardens, parkland and woodland by the River Bure.

Blickling Hall was designed by Robery Lyminge for Sir Henry Hobart who was the distinguished Chief Justice for King James I. Later building and alteration was made by Thomas and William Ivory for John Hobart in the 18th-century. This work resulted in a splendid and harmonious combination of Georgian and Jacobean blending perfectly together.

Don't miss Blickling Hall's most spectacular room - Sir Henry's long gallery. It is over 37 metres long and has a superb carved plaster ceiling built by Edward Stanyon. In about 1745 this gallery was converted to a library which still contains one of the most historically significant collections of manuscripts, documents and books in England. The collection includes a very rare Eliot Indian Bible (circa 1663) and a unique maritime atlas of the same period.

Blickling Hall was owned by Sir John Fastolf of Caister in the 15th-century and his coat of arms is still on display. Ann Boleyn was born here probably in 1507 and there is a fascinating statue and portrait to see. Note that the current Blickling Hall building was built on the ruins of the old Boleyn property and nothing visible remains. The only trace is the dry moat ringing the house now planted with roses and hydrangeas, and other beautiful plants. It is said that Anne Boleyn's ghost returns here every year in a carriage on the anniversary of her execution. Much later, during the second world war, Blickling Hall was requisitioned and used as an officer's mess for nearby RAF Oulton.

At Blickling Hall visitors can see one of the most important book collections in the care of the National Trust and discover years of fascinating history, enjoy walking, cycling and wildlife-spotting in the park, and follow Blickling's wartime history in the Royal Air Force Museum. Blickling Hall is located at Blickling, Norwich, NR11 6NF.

National Trust Membership and Benefits
As Britain's largest conservation organisation, we help protect over 300 historic houses, 700 miles of spectacular coastline and over 600,000 acres of beautiful countryside. Become a member today and your subscription will go towards the care of our precious heritage and countryside For Ever For Everyone. Membership includes unlimited entry to hundreds of historic houses, beautiful gardens and country parks.
Join the National Trust Today