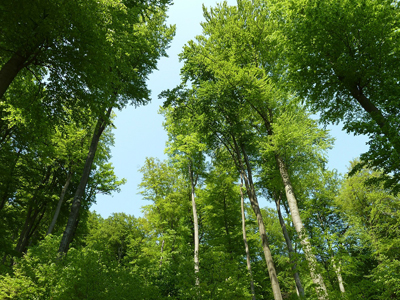 Image by anthark from Pixabay

Beech Trees in The Countryside

The beech tree is easily recognised by the olive-grey, smooth bark, and by the shape of the base of the trunk, which usually has the appearance of being formed by the union of several separate columns. When well-grown the tree is lofty, and bears a wide-spreading crown of branches which, when clothed with leaves in summer, casts a dense shade. The ground beneath the tree is generally destitute of other vegetation. The winter-buds are long and pointed; they expand in May, the new shoots at first drooping, but straightening out in a fortnight or so. The leaves are broad, thin, and glossy, and are fringed with fine, silky hairs. Young beeches, like young oaks, often retain their leaves through the winter.

The tree is in flower by the time the foliage has fully developed. The male flowers are borne in small, rounded catkins. The female flowers are in pairs. Each pair is surrounded by prickly scales, and gives rise after fertilisation to two three-sided and pointed nuts enclosed in a woody cup or husk. The husk is covered with hard, blunt prickles, and when ripe splits into four parts.

Beeches do not attract many insects, but squirrels frequent them for the sake of the nuts. The prickly husks protect the fruit from being eaten before it is ripe. The Spanish, or sweet chestnut is allied to the oak and beech. It has long, narrow leaves; it flowers in July. Its fruit is enclosed in a prickly husk, which splits into four when the nuts are ripe in October.